Brick is a political cartoonist, comics creator and double Eisner Award nominee. His graphic work includes the MIND book of the year runner-up, Depresso, the Eisner Award nominated WW1 anthology To End All Wars (co-edited with Jonathan Clode) and the Syrian war exposé East of Aleppo. Bizarrely, he is the only Hon. Ass. Prof. of Comics in the country, at the University of Nottingham.

As John Stuart Clark, he is the adventure travel writer behind After the Gold Rush and The Chalke Way.

He has been researching the case of ‘Leonardo’s bicycle’ for over thirty years. 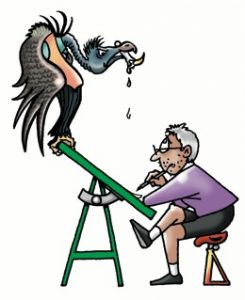